My Deaf father and hearing mother met at the NC School for the Deaf in Morganton in 1968. Mary Jo was a 22-year-old student teacher and Archie was a supervisor in the high school boys’ dorm. They spent their careers working at the school until they retired, which meant that my sister and I kind of grew up on the campus. We made hideouts under the basketball bleachers, listening to the high-pitched, turned-up scoreboard buzzer; did our homework after school in our mom’s English classroom; had birthday parties in the Scout cabin; and learned to drive in the empty parking lots on weekends.

I returned to the school as an adult to experience Deaf spaces more fully and to get an idea of what it would be like to be a student who lived at the school, immersed in Deaf culture and signing ASL (American Sign Language).

Before I started the project I told people I wanted to make photographs to show that these Deaf students were no different than any other high school student anywhere in the U.S. They gossiped in the hallways, worked on homework, passed bored hours watching YouTube videos, spent way too much time on their phones, and got frustrated when their basketball game wasn’t on point.

What I did see that’s different: hearing aids and cochlear implants tucked behind ears; videophones mounted in common spaces; flashing lights in the hallways and classrooms instead of bells to signal class changes; English class taught as a foreign, or second, language; and a prom that featured a Deaf DJ who turned up the bass for more vibration. There were students who have some hearing and others, like my father, who have no hearing at all. There were students who had been “mainstreamed” to schools with hearing students but transferred to NCSD to be around other kids who could say more than “hello” to them without an interpreter.

There were students who grew up with families unable to communicate with them and so had no language at all until they started kindergarten at the school. And there were students, like my dad, who grew up in Deaf families, surrounded and supported by Deaf culture. I learned some of the unofficial school rules and practices: Hearing teachers and staff are required to sign at all times to ensure language access for the students and Deaf staff. Teachers seem to be more tolerant of students talking in class, recognizing the importance of language development and the need for students to look at each other when signing. Only Deaf people can make up a name sign, a special sign that is used to uniquely identify a person, just like a name. 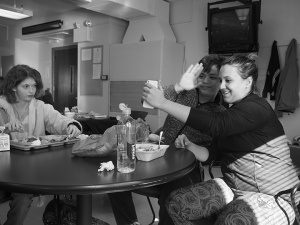 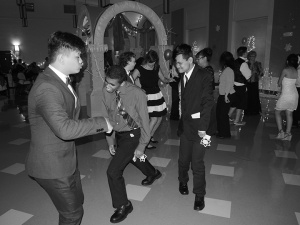 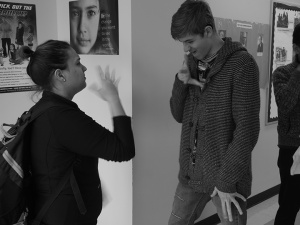 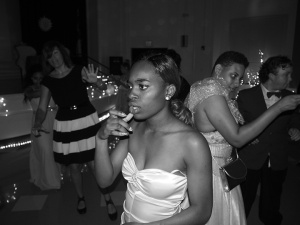 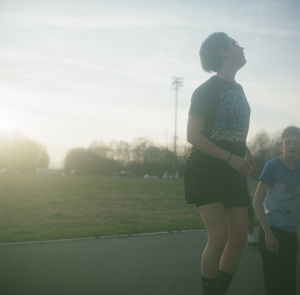 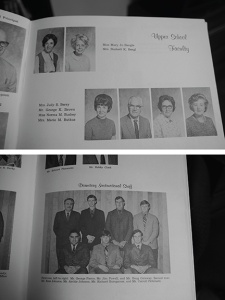 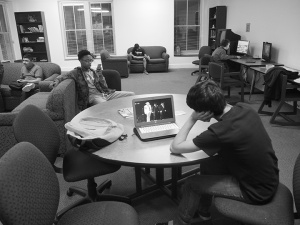 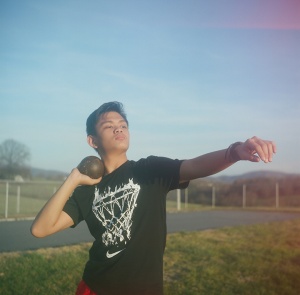 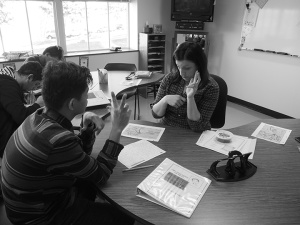 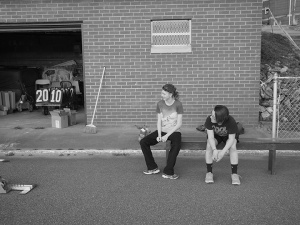 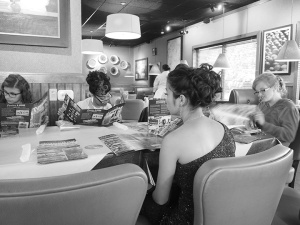 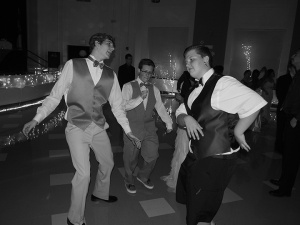 A lot of this has changed. When my dad was a student, the school taught using the Oral method exclusively, which only allowed the use of speech and speechreading. Much of the classroom time was devoted to teaching speech, even to profoundly Deaf students. They weren’t allowed to sign, except in afterschool hours in the dorm. By the first year that my mom started teaching, teachers were required to use the Rochester Method — fingerspelling every word they said. It was tedious and exhausting for everyone, my mom said, and only lasted a year. After that, the school adopted the Total Communication philosophy that was designed to meet each students’ needs, incorporating a combination of speech, speechreading, fingerspelling, and Sign.

Over the course of three months photographing at NCSD, I spent time with three high school students – Vincent, Haley, and Cheyenne – in their classes (English, Science, Vocation/ Robotics), their dorms, hanging out after school in the library or on the track field, and at their prom.

Cheyenne rode the NCSD bus to her after-school job at Firehouse Subs and lived with three other seniors in a house on campus that helps students prepare for independent living after graduation. I ran outside with her and the rest of her English class when it started snowing unexpectedly one morning and watched her twirl around in the falling snow with the biggest smile on her face. I shadowed her on campus as she hugged teachers in hallways, chatted with friends on video phone, and got made up by local stylists who volunteered to do hair and makeup for the NCSD prom.

Vincent is NCSD’s most long-term exchange student, visiting from the Philippines and staying with a host family in Charlotte on weekends. Though ASL is a second language for him, Vincent seemed to have picked it up easily just a few months after coming to the U.S. On a rainy Sunday evening after the bus dropped off the residential students for the week, Vincent introduced me around the high school dorm common room where students chatted on video phones, watched Michael Jackson’s Thriller video on YouTube, and did their homework. It was Vincent who found a stash of old NCSD yearbooks on a shelf and suggested I look up my parents’ photos from when they started working at the school.

Ethan let me tag along to his vocation class where he used power tools, shellacked and painted NCSD ornaments and plaques, and demonstrated the robot they were taking to the state competition later that year. I followed him on his after-school schedule of track and basketball practice and hanging out laughing and talking with friends in the library. And I watched as he came alive improvising epic ASL dance battles at the prom with his best friend, Martha, and his younger brother, Chase. Ethan and Chase are day students, going home every night with their family.

Being in the school made me appreciate the shift the school has made to embracing Deaf culture and supporting students in an environment that affirms their language, their community, and their independence.